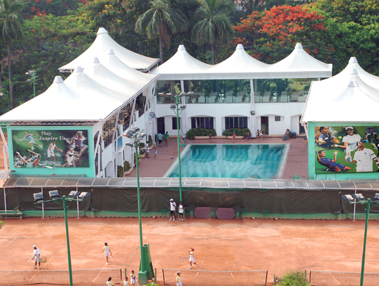 Born in 1928, Dakshin Kalikata Sansad (DKS) was the brainchild of a group of visionaries who were keen to develop sports in the city of Kolkata. It was then known as The South Calcutta Club.

Cricket and soccer were played on the famous Deshapriya Park, while the campus had three clay tennis courts and four grass courts, as well as a table tennis room. Yet, it produced a number of champions not only at the state level, but also at the national and the international levels.

The club has successfully shouldered the sporting legacy started by the visionaries of yester years. It has successfully bridged the gap between tradition and modernity. Since the 1970’s, it started organizing the state level Tennis Championships. For the last two decades, DKS holds The International Tennis Federation Junior Tournament (ITF Juniors) that features key junior players from the world over.

DKS holds regular coaching schemes for tennis, cricket and table tennis where more than 300 children get the opportunity to pursue their respective sports disciplines in the sylvan surroundings.

Besides sports, DKS has vigorously promoted socio-cultural activities. Every evening, the club arena is buzzing with activities. It has been a favourite place for children and their parents to relax, away from stressful life. The club’s library has an excellent collection of books, that attracts both children and adults.